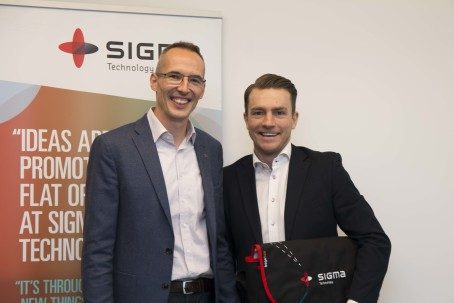 Vác FC, currently playing in the second division, enchanted Hungarian football fans when it became Hungarian Champion in 1994, only to be stopped by Paris St.-Germain in the Champions’ League.

Under the ownership of charismatic English businessman John P. Marshall, the team has become an epitome of business transparency and fair play in Hungarian football and has gained a lot of trust and positive attention from local supporters and Hungarian football fans alike.

What the club has received in investment and support it is keen to give back within its wide-ranging CSR activity called “Vác FC in the Community”. The program has already reached thousands of people in need and has included events like blood donation, regular visits to children’s wards in hospitals, setting up kindergarten pitches, giving out free match tickets for the homeless, and creating a “family-friendly” viewing zone in the Vác stadium.

György Nagy, Country Manager at Sigma Technology Hungary, says: “We are delighted to have met Vác FC. John and his team have shown that there is no limit whatsoever to what striving for good can achieve – in business, sports or social relationships. Vác FC is no major team, not even by Hungarian standards, their resources are scarce, and money is still tight. But their ambition to do positive change is limitless, and their influence is multiplied through the lives they touch, be it fans or sick children. Talent, business savvy, and team spirit go a long way at Vác FC. And so they do also at Sigma Technology.”

“Sigma Technology are at the forefront of their sector due to their innovative and imaginative attitude. In turn, I also believe that our visionary approach to the football business in Hungary is groundbreaking. Therefore, our relationship with Sigma is a perfect match, there is an instant synergy between our business philosophies. The fact that Sigma Technology also supports Vác FC in its CSR activities makes me, not only proud but sure that our partnership is a special one. Vác FC is looking forward to a long term working relationship with Mr. György Nagy and his team.”