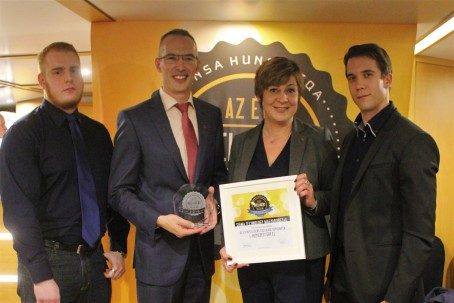 Sigma Technology Hungary is awarded the title of the Intelligent Company of the Year for the second year in a row.

This year is the third time that Mensa HungarIQa, the Hungarian branch of Mensa, the largest and oldest high IQ society in the world, organized the Intelligent Company of the Year competition.

This year 22 companies have signed up, and a total of about 1000 employees have written Mensa’s standardized IQ test. According to the rules, the winner of the Intelligent Company of the Year award is the company who has the highest number of employees with a “Mensa-score”, that is, a result which is in the top 2% of the population.

“I’m so happy that Sigma Technology Hungary has been awarded the Intelligent Company of the Year award for the second time in a row. Intelligence makes a lot of sense, no wonder we look for it everywhere: during recruitment, in setting career and competence development paths for our employees, and in how we deliver our engineering solutions to R&D customers around the globe. Winning the award once was tough – keeping the title was even tougher because you are the one to beat. My deepest gratitude goes to our staff for keeping us ahead of our competitors, no matter the race.”