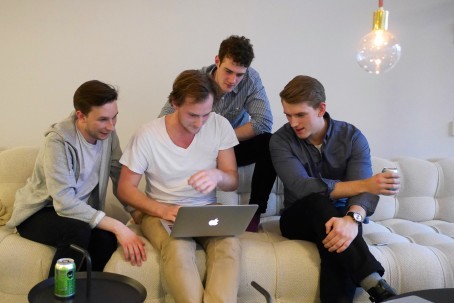 The event was a contest for students to demonstrate their skills at decrypting encoded messages. The aim was to meet talented young specialists and acquaint them with Sigma and the opportunities we offer.

The evening started with dinner and a short company presentation, and then the competition followed. Sigma Technology gave participants the chance to solve a couple of encrypted messages. The students received the encrypted text as well as information of the kind of algorithm that was used to encrypt it. They had about 20 minutes to write a program in any language of their choice to decrypt the message into clear text.

Kirill Nikitin and Simon Olander were the winners and were awarded a VIP guided tour to Sigma Technology’s office, during which the company representatives will tell about the company and the areas of its work. After the tour, students are invited for a lunch to a nice Stockholm restaurant. The tour and lunch are planned for May 6th.

“The Cryptology night proved to be a great event. We have received a lot of great feedback after the competition has ended. Everybody was really enthusiastic and told us that they now consider Sigma as a very cool company to work for,” says Daniel Thysell, Vice President at Sigma Technology Development Stockholm. “We are always keen to support students and their professional growth. Such events are a great place to network, share knowledge, meet talents and give them a boost for their development.”

The next tech night is planned for May 11th with barbecue and games in Sigma Technology’s office backyard. Hurry up to join the event on Facebook!